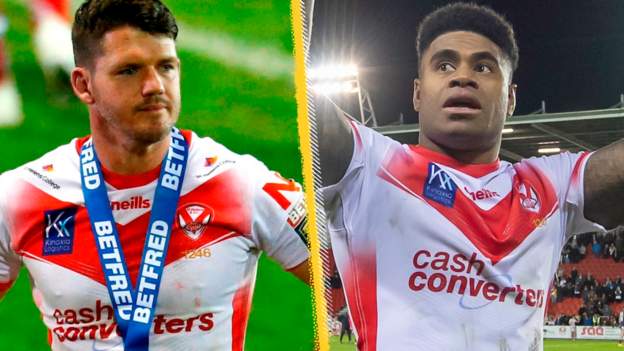 Both were involved in back-to-back Grand Final wins in 2019 and 2020, and victory over Catalans Dragons would seal the hat-trick for the Saints.

“It would be unreal to finish on a high at Old Trafford,” Coote said.

“Last year didn’t really feel like a Grand Final but I’m sure this year it’s going to be back to the old ways.

Naiqama added: “It’s just a really special group of players and coaching staff. It shows with the silverware and the games we’ve been a part of, it speaks for itself.

“You’d think after winning so many games, being part of these Grand Finals and the Challenge Cup, that it would drop off, but just with the group, we have here I can’t speak more highly. I’m really proud to be a part of it.”

Coote’s future was in the balance after his spell at National Rugby League side North Queensland Cowboys soured in 2018, but the move to Saints for the following season has had a revitalizing impact.

The Scotland international has thanked the club and coaches Justin Holbrook and Kristian Woolf for having “saved his career”, and is also grateful to his teammates for their contribution.

Even before the weekend’s result, he will depart St Helens for East Hull with at least two Grand Final rings and a Challenge Cup winner’s medal, to go with his NRL premiership from the Cowboys in 2015.

“I’m going to miss the players around me, it’s going to be hard to go away,” Coote said. “They’ve brought the best out of me.

“Having the likes of James Roby running us out, there’s no one better to want to step up and play for, and not being on the field with him is going to be really different.”

Naiqama is ready to sign off and reunite with family

Having been stranded 12,000 miles from his newborn daughter in Australia by the coronavirus pandemic and restrictions around travel, Naiqama’s decision to leave this autumn has been purely personal, rather than sporting.

His powerful center play has been a major feature of the Saint’s success, picking up two Grand Final rings and winning the Challenge Cup at Wembley.

Saturday’s final hurdle at the ‘Theatre of Dreams is all that stands between the Fiji skipper and those he holds dearest.

“I’ve decided to put my wife first and my daughter first,” he added. “That trumps everything, they’re the most important thing to me.

“It’s the biggest reason I’m going back. I’ve had an amazing time here and had things not happened with Covid how they were and not being able to see family, I would probably have extended.

“I’m grateful for my time here and looking forward to putting in one last big performance.”

Hope for the future at Saints

The exits of Coote, Naiqama, and others such as James Bentley and Theo Fages, will provide opportunities for the young talent within the squad.

Jack Welsby’s emergence as an essential name on the teamsheet has arguably accelerated Saints’ decision to allow Coote to depart, while Lewis Dodd is the outstanding candidate to replace Fages at scrum-half following his move to Huddersfield.

Woolf’s task as head coach will be to sustain the success despite the tweaks in personnel, which will see Will Hopoate, James Bell, and Curtis Sironen among others arrive for 2022.

“There’s a few of us moving on, but the club has been able to keep its consistency,” Coote said.

“I don’t think anyone player can be the reason for the success, and I think the club is in safe hands with Jonny [Lomax] re-signing and Jack Welsby and Lewis Dodd. There’s definitely a good spine to build around.”