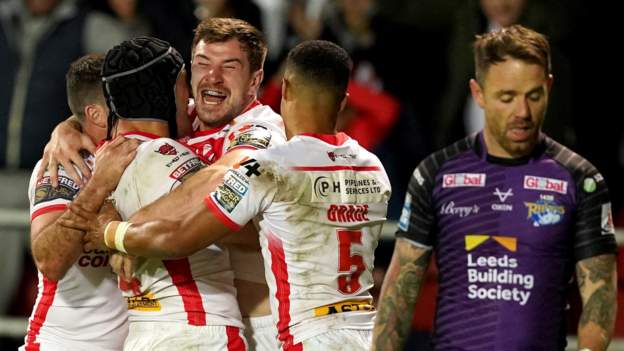 Regan Grace gave the reigning champions an early lead, which James Roby extended before Richie Myler got Leeds on the board just before half-time.

After beating Wigan in Hull to win last season’s showpiece, St Helens will now return to Old Trafford – the scene of their Grand Final victory over Salford in 2019 – to face the League Leaders’ Shield winners a week on Saturday.

Challenge Cup winners Saints’ relentless quest for silverware showed no signs of abating here, as Kristian Woolf’s side showed their dominant steel to ensure their hopes of a ‘three-peat’ remained on.

In a febrile atmosphere charged with emotion as several players said their goodbyes on home soil, Saints hit Leeds with a whirlwind first quarter in both halves to put the game beyond doubt.

Alex Walmsley, as he had done in their regular-season meeting just a few weeks previous, wreaked havoc with his powerful carries, and off the back of that platform Jonny Lomax, Lewis Dodd, and Lachlan Coote, who kicked six goals, opened the visitors up.

Grace finished off twice following sharp moves to the left, as did Percival, while Roby’s sniping effort and Naiqama’s farewell score in his last home game before returning to Australia for family reasons at the end season were equally well received.

Leeds showed character to stay in the game when the Saints looked to have it won, and their reward came from Myler’s smart cut back inside and Briscoe’s superb finish in the corner under pressure from Dodd.

The only disappointing note was the number of yellow cards, with four players spending 10 minutes in the sin-bin, and Morgan Knowles in particular might have a nervous wait for the judiciary to see if he will be available for next week’s final after his late shot on Kruise Leeming.

Richard Agar and the Rhinos said their own goodbyes, with Rob Lui and Konrad Hurrell departing after this game, but it was Saints’ night after a dominant display.

“I thought right from the start, we showed great intensity. We were good enough to hold that intensity the whole game.

“We certainly haven’t won anything yet. We have a lot of hard work to go and do.

“We are playing a very, very tough side in Catalans.

“One thing I know this group will do is that they are going to give themselves every chance.”

“[We were] beaten by a better team on the night. We didn’t execute and get to the levels we needed to get to.

“Some of that [blame] should be laid at our feet, but also the relentless pressure that they put us under and the speed and power they played with.

“They set the tone defensively very well and made it very difficult for us.

“Our start was nowhere near where we needed it to be, but I thought we showed plenty of fight.”