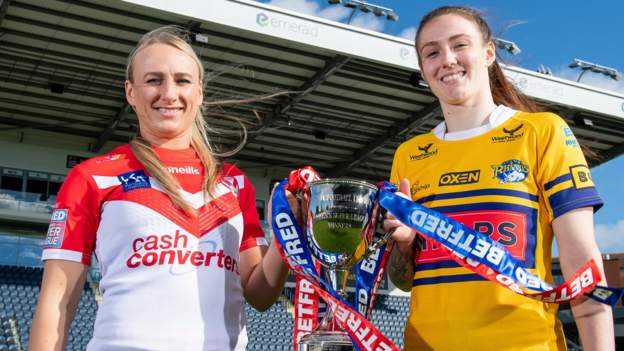 The newly-crowned Woman of Steel for 2021 leads Saints out at Headingley, hoping to secure the treble.

Saints edged the Rhinos in the Challenge Cup semi-finals and also in the regular-season table.

“We look forward to those games,” Cunningham told BBC Sport.

“When we get the fixture list at the start of the year, the Leeds games are ones we circle.

“This year we’ve only played them once – 20-12 and Saints came out on top (in the Challenge Cup semi-finals) – so I know it’s going to be close and tight. It’ll be a tough game, really intense and the rivalry will 100% be there.”

Leeds took two of the three prizes available in 2019 with a Grand Final and Challenge Cup to double before Covid hit in 2020 to rob the women of an entire season.

But Saints – normally the bridesmaids with semi-final exits – have turned the tide in 2021.

Their Challenge Cup final win over York in June was the start of a bid for all three trophies and Cunningham says it is a sharper, more experienced Saints this year.

“It’s what’s really important for us, being in a final now,” she added. “We’ve got over that semi-final hiccup and performed in the final as well.

“Both teams absolutely know how to win, and I think one of the absolute plus points of Leeds is they turn up in the big games when the pressure is on.

“No matter what the scoreline is at half-time, they can 100% turn games around in the second half and have individuals who can turn games on their own.”

Cunningham’s words are backed up by one of Leeds’ talented England crop in full-back Caitlin Beevers, who has the highest regard for Rhinos skipper Courtney Winfield-Hill – one such game-breaking player.

Winfield-Hill traded cricket’s leather and willow for the rough and tumble of rugby league when she arrived in the United Kingdom from Australia and proved her worth with Grand Final and Challenge Cup honors in her debut season.

Yet, her on-field attributes are measured in more than just a superb kicking game and distribution from half-back.

“In our last Grand Final we were 18-points behind and I came into the changing rooms infuriated and annoyed and she just said ‘What are you doing?’,” Beevers recalled.

“I said ‘We’re behind’ but she replied ‘We always come back from behind’, and instantly everybody just calmed down.

“It’s not the position we want to be in but when someone realizes people are under pressure and can just take the weight off their shoulders with a few simple words, that’s a pure captain right there.”

Although there has been only one meeting between Saints and Leeds during 2021, as Covid had an impact on the fixture schedule, the two leading clubs in this year’s Women’s Super League are familiar foes.

Craig Richards’ England camps were a golden chance for the sizeable international contingents of both clubs to get out of the house and train as elite sportswomen during the lockdown.

As a result, players such as Saints’ Emily Rudge, Cunningham, and Amy Hardcastle, and Leeds’ Beevers, Fran Goldthorp, and Tasha Gaines spent plenty of time in each other’s company – but there will be no blurring of the boundaries come kick-off time.

“Saturdays in lockdown were practically always England training sessions,” Beevers said. “We got to know each other personally and what we’re good at and what we’re not so good at.

“They’ll know me pretty well, but I’ll know a lot about them too. We know each other pretty well.

“At the end of the day, in the game, nobody’s your mate. I’ve always been brought up with that on the field. You’re playing for your teammates and they’re the only friends you need during the game, so you look after them.”