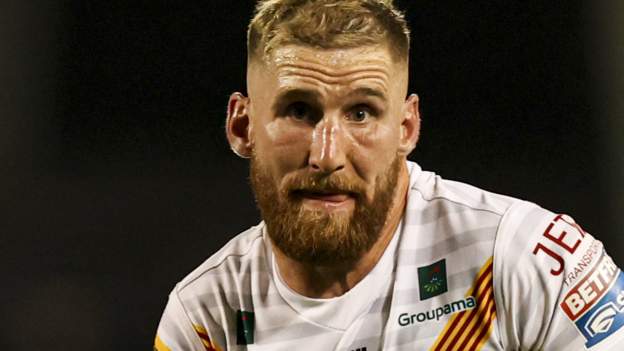 Catalans Dragons have named 2021 Man of Steel Sam Tomkins in their 21-man squad for Saturday’s Grand Final against St Helens despite nursing a knee injury.

Tomkins, 32, missed the semi-final win over Hull KR with the problem, despite being named in the group, but is expected to return for the showpiece.

Lachlan Coote and Kevin Naiqama are in line to play their final Saints games.

Coote is off to Hull KR for 2022 while Naiqama is returning to Australia to be closer to family.

History could be made and a number of Super League landmarks written in folklore if Catalans can prise the title away from St Helens.

Not only would it be their first title, just 15 years after joining the competition, but it would also be a new name on the trophy – a first overseas winner and the fifth club in all, joining Saints, Leeds, Wigan, and Bradford.

Head coach Steve McNamara has already brought the Challenge Cup and League Leaders’ Shield to the Stade Gilbert Brutus since taking over in 2017, but the title would be the pinnacle.

Ben Garcia is in his first season as Dragons skipper since taking over from the departed club legend Remi Casty and could join an elite club of players to have lifted silverware at Old Trafford in domestic rugby league’s showpiece event.

Meanwhile, Saints would equal a rare feat if they are to achieve success at Manchester United’s ‘Theatre of Dreams on Saturday evening, by matching Leeds’ consecutive title wins of 2007, 2008, and 2009.

Their fans will remember those games less than fondly, given each of those Rhinos triumphs were at St Helens’ expense.

But under Justin Holbrook and then Kristian Woolf, Saints have won the past two Grand Finals – beating Salford in 2019 before a last-gasp win over Wigan last season.

Veteran skipper James Roby could feature in his 10th Grand Final, one behind record-holder Jamie Peacock, while it could also be the last big event for stalwarts such as Louie McCarthy-Scarsbrook and Kyle Amor as they ponder one last year in 2022.