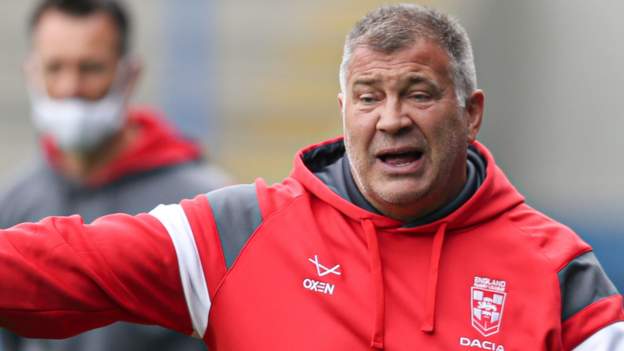 England coach Shaun Wane has returned to Wigan in a “leadership” role as part of a reshuffled backroom team of new head coach Matt Peet and assistants Sean O’Loughlin and Lee Briers.

He has had just one game with England because of Covid, a postponed World Cup, and a canceled Australia Test series.

Peet and O’Loughlin are promoted from within, while Briers is a new arrival.

The coaching team has been put together to succeed former Warriors player Adrian Lam, who left after two seasons in charge at the end of Wigan’s 2021 campaign.

“This role presents me with an exciting new challenge,” said Wane, who will continue as England coach in addition to his new job as leadership and management director at the DW Stadium.

“My passion is developing people and culture and being able to do this at my hometown club is the perfect fit,” he told the club website.

Having left Wigan to take up a role in the Scottish rugby union, Wane was handed a return to his native code by the chance to coach his country in February 2020.

Although he has expressed his immense pride at the opportunity to coach internationally, the lure of a role with the club where he grew up and forged his career as a hard-working prop was too inviting to turn down.

“I’m looking forward to working with Matt, Sean, and Lee immensely,” he added.

“I’ve known Matt for years – he has great qualities. He is a coach that cares about his players and has an outstanding work ethic. I think he is the perfect fit for Wigan.”

New assistant Briers, meanwhile, left Warrington at the end of the 2021 season, following Steve Price’s final game in charge before moving to Australia.

Peet, like Wane before him, has been nurtured through the ranks and has served practically every department at Wigan before taking on the head coach role from Lam.

“My philosophy on coaching is challenging every individual to a really high level and creating an environment that supports and cares for them,” Peet said.

While Peet’s promotion from assistant to head coach was to be expected, having worked his way through the ranks at the Warriors, the appointment of Briers is slightly from left-field.

Alongside O’Loughlin – another world-class player who has hung up the boots to take on a coaching post – Briers will look to improve a Wigan attack that scored just 72 tries in the 2021 season, 40 fewer than league leaders Catalans Dragons.

As a player, Briers was one of the Super League’s most creative and devastating weapons at half-back, with a kicking game to rival any of his peers and the vision to pull the strings.

Since moving to coach, he has worked under both Tony Smith and Price at Warrington, where his exit at the end of this season had been confirmed with Daryl Powell’s impending arrival.

Likewise, O’Loughlin was a ball-playing loose-forward whose leadership was key across 19 seasons at Wigan, and the pair are looking forward to getting into their roles.

“I’m really excited for the challenge – it’s what dreams are made of,” Briers said. “Wigan is a massive rugby league club in anybody’s eyes so to be asked to come and coach here is special.

“We’re all focused on one thing and that’s making Wigan attractive winners again. We’re on the same wavelength, we’re all aligned and we’re looking forward to the job.”

O’Loughlin added: “I learned a lot last year, but this is a top-quality coaching team and, hopefully, I can improve and move forward this year with them.

“Matt has been a coaching mentor to me and I’ve already learned a lot from him. He’s always looking to improve coaching, learning from other organizations, people, and players.”