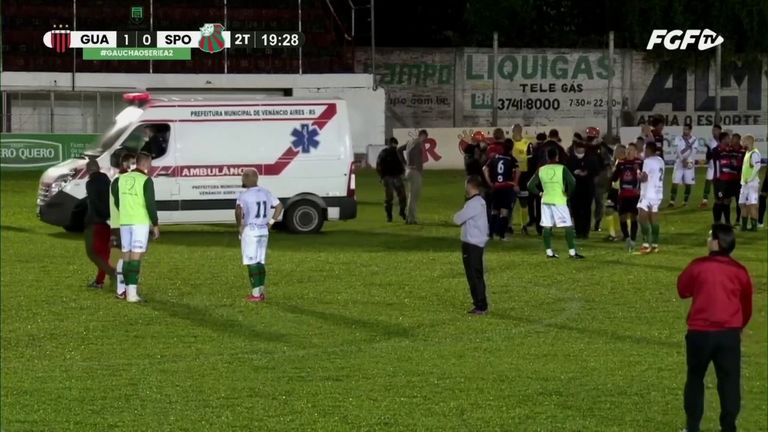 Sao Paulo de Rio Grande footballer William Ribeiro is arrested and charged with attempted murder after kicking referee Rodrigo Crivellaro while he lay on the ground; Crivellaro had failed to give Sao Paulo a free-kick; he was released from the hospital Tuesday morning

A Brazilian footballer has been charged with attempted murder after kicking a referee in the head during a second division game, knocking him unconscious, authorities said.

The incident happened after Crivellaro did not give Ribeiro’s Sao Paulo team a free-kick.

The match was suspended and Crivellaro was taken to a local hospital after being knocked unconscious. Ribeiro was arrested at the stadium and charged with attempted murder.

Crivellaro was released from the hospital Tuesday morning. The referee told journalists he is yet to see footage of the incident.

Local police investigator Vinicius Assuno told journalists that a judge will decide whether Ribeiro will remain in custody during the investigation or be released on bail.

“His attack was very strong and violent, kicking the referee in the head and making him pass out,” Assuno said. “The referee had no chance of defending himself.”

The suspended match will be resumed next week on Tuesday. Sport Club Sao Paulo released a statement, regretting “one of the saddest episodes in their history” and that the player’s contract with the club was terminated.

The incident happened on the day that Sao Paulo was celebrating their 123rd anniversary.