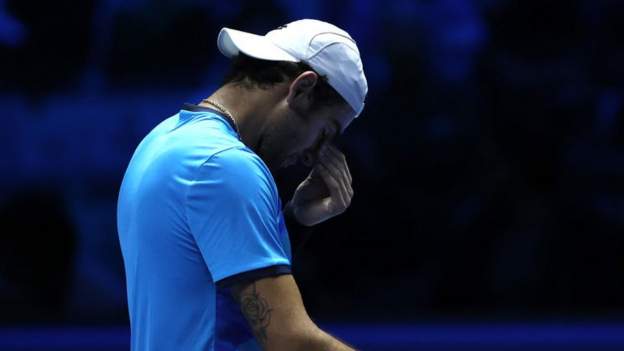 An emotional Matteo Berrettini withdrew from the ATP Finals after failing to recover from an abdominal injury that forced him to retire from his opener.

The Italian had been due to face Hubert Hurkacz in his second group-stage match in Turin on Tuesday (20:00 BST) but pulled out four hours before it.

He will be replaced by compatriot Jannik Sinner, who is first alternate.

Britain’s Cameron Norrie is the second alternate at the season-ending event for the year’s leading eight men.

“I never thought I’d have to give up the most important tennis event ever held in Italy in this way,” added Berrettini, 25.

The world number seven broke down in tears on Sunday when he had to retire from his opening ATP Finals match against Alexander Zverev early in the second set in front of a passionate home crowd.

“The truth is that as much as I wanted to play in front of you once again, I felt and therefore decided that my body is not ready to face the challenges that lie ahead,” he said.

“To say that I am sad would not do justice to the state of mind that I am in, I feel robbed of something that I have conquered with years of effort and sweat. It was not an easy decision, but I am convinced that it is the best for me and for my career.”