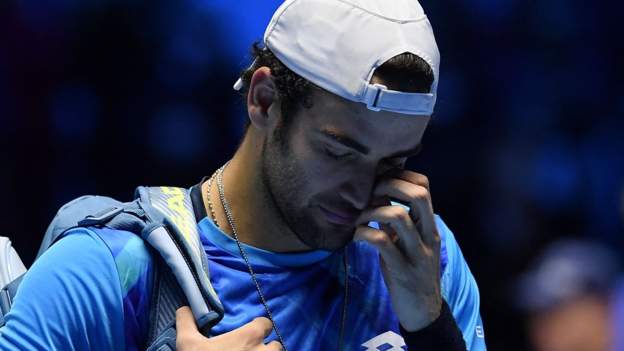 Italy’s Matteo Berrettini broke down in tears after an abdominal injury forced him to retire from his opening ATP Finals match in front of a passionate home crowd in Turin.

Sixth seed Berrettini pulled up with the problem early in the second set against Germany’s Alexander Zverev.

But the 25-year-old could only hit one more serve before having to retire.

Zverev, 24, said he “felt like crying” at Berrettini’s misfortune.

“This is the worst feeling a player could have,” added Zverev, who clapped his opponent off court and drew a sad face on a television camera lens.

“For Matteo, playing at home, this will be the worst feeling he will have in his career.

“The tennis is not important, the most important thing is both players can shake hands at the end of the match and are healthy.”

If Berrettini is not fit enough to continue in the season-ending event then Jannik Sinner – another Italian player – would replace him as the first alternate.

British number one Cameron Norrie is the second alternate in Turin, which is hosting the event for the first time after taking over from London.

After Berrettini trudged off court, Zverev told the crowd: “Everyone here was looking forward for him to play in three matches, maybe semi-finals and final, and it isn’t going to happen this year.

“He will be back next year, I hope you can all wait. I feel sorry for Matteo right now.”