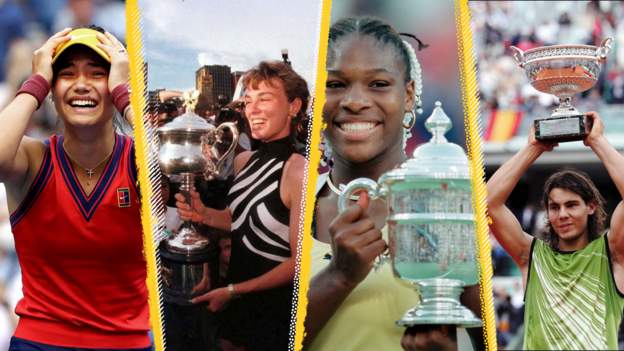 British teenager Emma Raducanu rewrote the history books when she won her maiden Grand Slam title at the US Open.

The 18-year-old new British number one, who has risen to 23 in the world rankings, joins an illustrious list of some of the best-known names in tennis, who hit the big time when they won their first major title while still a teenager.

The ‘Swiss Miss’ is still the youngest female Slam champion in the Open era, winning the 1997 Australian Open by beating Mary Pierce. She went on to win five Grand Slam singles titles in total.

Hingis first retired in 2003 after two ankle surgeries. She returned to competition in non-tour events in 2005 before announcing her comeback to the WTA Tour a year later.

In 2007, Hingis was investigated for testing positive for a metabolite of cocaine and was suspended by the International Tennis Federation for two years.

She made a third return to the sport in 2015, focusing more on doubles, winning four Slam titles in women’s doubles and six mixed doubles titles before retiring for a final time in 2017.

Seles won eight Slam titles before she turned 20, but, in 1993, was the victim of an on-court knife attack. She returned to the tour in 1995 and won another major, but struggled to find her best form. She played her last official tour match at the 2003 French Open.

Austin remains the youngest US Open champion in history and added another title in 1981.

The American struggled with injuries after that and was often sidelined for long periods. She attempted a comeback in 1988 but had a near-fatal road accident a year later. She attempted another return in 1993 but finally retired the following year.

Famously beat Serena Williams in the final at Wimbledon 17 years ago to claim her maiden major trophy. The Russian went on to win a total of five Slam titles, including two French Opens on clay – a surface on which she famously described herself as being a “cow on ice”.

Sharapova retired in 2020 after being hampered by shoulder injuries in the latter stages of her career. She had served a 15-month suspension from the sport after testing positive for meldonium at the 2016 Australian Open.

The most notable to win only one is the youngest male Slam champion Chang, who beat Stefan Edberg at Roland Garros in 1989.

Despite reaching a world ranking of number two in the world and a total of 34 career titles, the American was unable to get over the line in the Australian Open and US Open finals in 1996.

Having followed older brothers Emilio and Javier Sanchez into the sport, the Spaniard upset Steffi Graf to make history at Roland Garros.

Two more Paris triumphs followed – including her last Slam in 1998 – and a US Open success in 1994, while she was runner-up twice at the Australian Open and Wimbledon. She also claimed six women’s doubles and four mixed doubles titles before retiring in 2002.

Two years later, Sanchez Vicario returned to play in the 2004 Olympics – her fifth appearance in the Games, from which she has two silver and bronze medals.

At the time the dynamic German won his first Wimbledon title, he was the youngest male player to win a Slam in the Open era.

Becker was also unseeded when he started his run, although he was 20 in the ATP rankings as seedings only went up to 16 back then.

He went on to win Wimbledon twice more, plus two Australian Open titles and the 1989 US Open.

The Swede made his mark when he won the French Open as an unseeded player, defeating Guillermo Vilas.

Wilander went on to win seven Slam titles in total with his best year in 1988 when he won three of the four, only missing out at Wimbledon.

He never won the singles title at SW19 but did win the men’s doubles in SW19 with compatriot Joakim Nystrom in 1986.

A three-time Davis Cup winner with Sweden, he was handed a three-month suspension by the ITF, having tested positive for cocaine at the 1995 French Open, and retired a year later.

Still active and still chasing the elusive 24th Grand Slam singles title which would draw her level with record-holder Margaret Court, Williams has seen her attempts in recent years thwarted.

She won the US Open in her first final, beating fellow teenager Hingis.

She first became a world number one in 2002 but has been troubled with injuries recently. Her last Slam title came in 2017 when she won the Australian Open while in the early stages of pregnancy.

Graf’s arrival on the scene was in the years of Martina Navratilova’s dominance, and the German beat the then world number one for a first French Open success.

She won a ‘Golden Slam of all four majors and Olympic gold in 1988, finishing with 22 major singles titles in her career.

Knee and wrist injuries beset the latter stages of her career and she retired at the age of 30 in 1999, when she was still ranked world number three and had just won the French Open and reached the Wimbledon final.

The Swede won 11 Slams – six French Opens and five Wimbledon – and he will be forever remembered for the epic 1980 showpiece against John McEnroe at SW19.

His initial retirement at the age of 26 in 1983 was a shock to the tennis world. He attempted a comeback between 1991-1993 but failed to win a match on the ATP Tour.

Nadal is the only member of the ‘Big Three’ of himself, Roger Federer and Novak Djokovic to win his first Slam title as a teenager.

He has won an unprecedented 13 at the French Open, together with seven at other majors. Nadal, Federer, and Djokovic are all currently tied on 20 Slam titles each.

The 35-year-old has struggled with injury throughout his career and ended his 2021 season last month because of a recurring left-foot problem.

Other teenagers who also won Slams

Pete Sampras, aged 19 years and 29 days, landed the 1990 US Open with victory over Andre Agassi. It was the first of the American’s 14 career majors, which included seven at Wimbledon. It was a record total in men’s tennis until surpassed by Roger Federer in 2009.

On the women’s side, Hana Mandlikova became the second-youngest female player to win a Grand Slam at the time when she beat Australian Wendy Turnbull in the 1980 Australian Open final. The Prague-born player, who was then aged 18 years and 329 days, would win three more Slams in her career before retiring a decade later.

Russia’s Svetlana Kuznetsova won two Slams in her career, the first in the US Open, aged 19 years and 76 days when she beat compatriot Elena Dementieva. She also landed the 2009 French Open.

Bianca Andreescu stunned Serena Williams at the US Open in 2019, aged 19 years and 83 days, but has been plagued with injuries ever since.

Iga Swiatek won the 2020 French Open aged 19 years and 132 days, beating Sofia Kenin, but the Polish player has yet to follow that up.

American Chris Evert claimed the first of her 18 singles Grand Slams when she beat Olga Morozova in the 1974 French Open final at the age of 19 years and 176 days.

Iva Majoli upset Martina Hingis to win her only Slam title in the 1997 French Open aged 19 years and 299 days, ending Hingis’ 37-match winning streak and handing the Swiss her first defeat in a Grand Slam final.

Australia’s Evonne Goolagong, aged 19 years and 309 days, lifted the French Open in 1971, beating Helen Gourlay for the first of her seven majors.