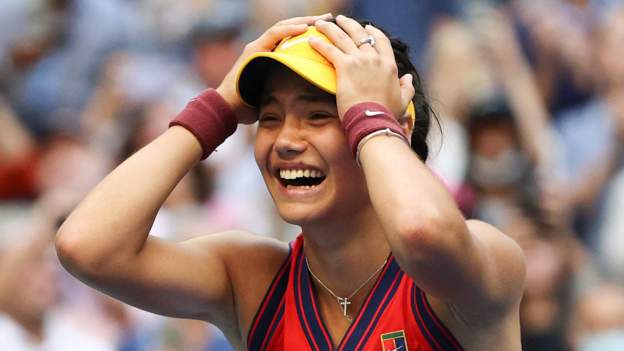 The Queen led the congratulations to Emma Raducanu after the 18-year-old clinched the US Open title with a stunning victory in New York.

“I send my congratulations to you on your success,” the Queen said.

“It is a remarkable achievement at such a young age, and is a testament to your hard work and dedication.”

In a statement, the monarch added: “I have no doubt your outstanding performance, and that of your opponent Leylah Fernandez, will inspire the next generation of tennis players.”

“You showed extraordinary skill, poise, and guts and we are all hugely proud of you.”

‘A star is born’, ‘a future world number one’ – praise pours in for Raducanu

Virginia Wade, who was present at Arthur Ashe Stadium to witness Raducanu’s win, was the last British woman to win a Grand Slam singles title – at Wimbledon in 1977.

In an unprecedented run, Raducanu became the first qualifier to win a major and has done so without dropping a set.

“A star is born,” tennis legend Martina Navratilova said. “Emma Raducanu makes history and she is just getting started.”

Former British number one Greg Rusedski, speaking to Amazon Prime, added: “She is going to be a multi-Grand Slam winner, a world number one.

“She is the real deal and it is a breath of fresh air having an 18-year-old win the event.”

Raducanu, whose run to the fourth round at Wimbledon earlier this summer is her only other Grand Slam appearance, will take home £1.8m in prize money and rise from 150th to 23rd in the world rankings.

“This [a qualifier winning a Grand Slam] is something I never could have believed would happen,” the Australian said on BBC Radio 5 Live.

“I think I am going to wake up. It is so unbelievable. It is flabbergasting to see this performance.”

Tim Henman, another ex-British number one who was courtside in his role working for Amazon, said: “She will win more of these [Grand Slams], she is that good.

“This is not some flash in the pan or fairytale. She is playing ‘top-five tennis’.

“Her world will be turned upside down but she has good people around her and it will be a hell of a ride if she can stay injury-free.”

‘Delay MOTD!’ & subtly checking scores at weddings – the UK is gripped by Raducanu

Raducanu won the title with a classy performance in a high-caliber match against Canada’s Fernandez that lasted almost two hours.

By the end, it appears as if it had the UK gripped, with many people tweeting to ask for Match of the Day to be delayed.

Presenter Gary Lineker tweeted: “First time in my life I’ve ever tweeted whilst on air but my goodness what a performance, what a triumph, what an amazing young woman.”

“I’m currently at a wedding, subtly checking on the score. COME ON EMMA!! From everyone at Will & Josie’s wedding” said one tester.

It started a theme…

Manny in Manchester added: “I’m currently at a wedding NOT subtly checking the score. Sorry, Chloe. Come on Emma.”

And Ben in London said: “We’re all at Laura and George’s wedding – don’t stop me now! Can’t check the score! Come on Raducanu!!!”