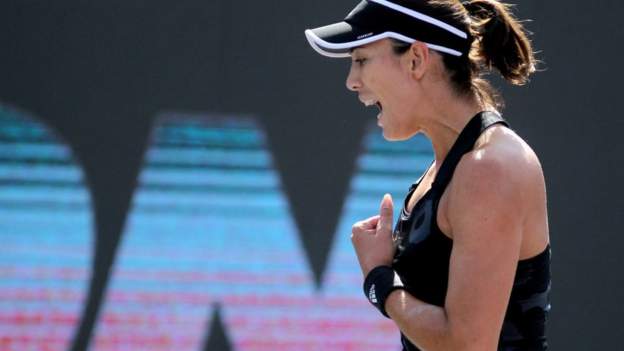 Garbine Muguruza’s power was too much for Paula Badosa in Mexico as she became the first Spaniard in 28 years to reach the final of the WTA Finals.

The two-time Grand Slam champion played with high intensity throughout the 6-3 6-3 semi-final win over her compatriot.

The 28-year-old will now have the chance to become the first Spanish winner of the season-ending tournament.

Standing in her way are Anett Kontaveit or Maria Sakkari, who meet in the day’s other semi-final (01:30 BST Wednesday).

Tuesday’s encounter in Guadalajara was a first meeting between Badosa and Muguruza, who broke in the third game of the opening set and never looked back.

Badosa was let down by double-faults at key times, with one of her six setting up set point, which Muguruza converted with a forehand winner.

Frustration bubbled for the 24-year-old, who repeatedly shouted at herself and slapped herself on the face at one changeover, and Muguruza capitalised by winning five games in a row to take charge of the second set.

World number five Muguruza overcame a brief wobble when she went 0-30 while serving for the match but recovered to seal victory when Badosa netted a backhand.

She will now seek to go one better than Spain’s 1993 runner-up Arantxa Sanchez Vicario and win the title on Wednesday.